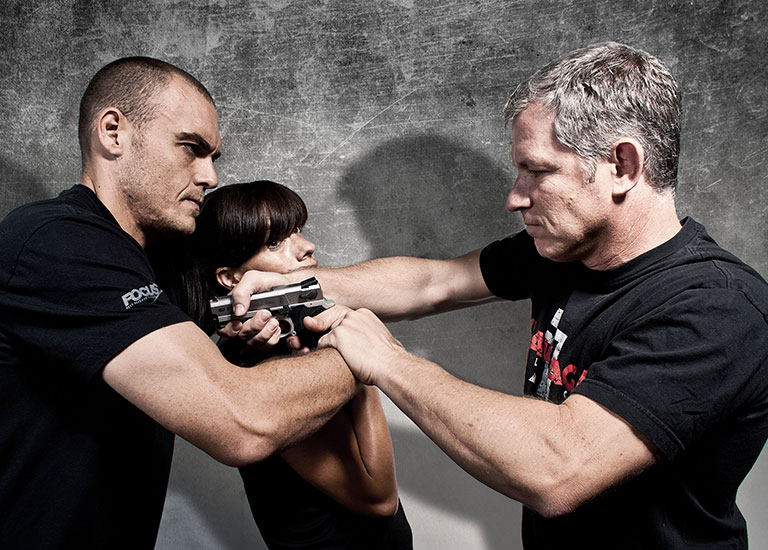 What is Krav Maga?

Krav Maga (Hebrew – "contact combat") is a self-defence and military hand to hand combat system developed in Israel. It came to prominence following its adoption by various Israeli Security Forces and is now used by military and law enforcement personnel, as well as civilians, around the world. Today, it is widely acknowledged as the number 1 self defence system in the world. The adapted civilian version of Krav Maga teaches you to defend against knife and stick attacks, multiple attackers, gun threats, abductions, rape and much more.

Krav Maga has taken many techniques from various martial arts; however, unlike the set routines and choreographed moves in some martial arts, Krav Maga teaches realistic fighting and self-defence – attacks in social settings (pubs, clubs, street etc). Typical training often includes exercises simulating fighting against one or several opponents and/or protecting another. This can also involve a debilitating scenario – the use of only one arm, while dizzy and against armed opponents.

There are no rules for Krav Maga fighting, and no built-in distinctions in training between men and women. Techniques generally focus on training combatants in conditions approximating real-life scenarios.

Krav Maga trains combatants for situations where losing would be potentially fatal. Its attack and defense manoeuvres aim to neutralize the threat and facilitate rapid and safe escape. These include a variety of fast and fluid crippling attacks to vulnerable body parts through various efficient and often brutal strikes. The improvised use of any available aids is encouraged – maximizing personal safety in a fight is emphasized.

Basic training is a mixed aerobic and anaerobic workout, relying heavily on the use of protective pads. In striking this helps the trainee practice manoeuvres at full strength, while the holder experiences the impact felt when getting hit. Various personal guards are available for protection, offering a realistic level of violence without risk of injury.

Training within extreme acoustic, visual, and verbal scenarios prepares students to ignore peripheral distractions and focus on the needs of the situation. Other training methods to increase realism might include blindfolding or exercising trainees to near exhaustion before dealing with a simulated attack as well as training outdoors on a variety of surfaces and restrictive situations.

Training will also cover situational awareness in order to develop an understanding of one’s surroundings and potentially threatening circumstances before an attack is launched. It may also cover "Self Protection": ways to deal with potentially violent situations, and physical and verbal methods to avoid violence whenever possible.